Shakuntala Paranjape : Crusade of a lifetime

Shakuntala Paranjape : Crusade of a lifetime

Pune Plus The Times of India

Popular posts from this blog

Fr. Rudolf Schoch. A Jesuit Looks back in satisfaction

April 18, 2016
Fr. Rudolf Schoch. Looking back in satisfaction Pune Plus, The Times of India (1991) By Camil Parkhe From days in the forties and fifties when he went horseback to visit the Jesuits-run 50 schools in Ahmednagar district to his present retirement days in Pune, it has been a period of great challenge and fulfillment for Fr. Rudolf Schoch. The founder of two reputed schools in state, and school principal for 38 years, Fr. Schoch has set a record of a sorts which may shared by only a few. By a strange twist of history, this Swiss-born Jesuit had to choose India as his Karmabhoomi and later, in a similar manner, education as his mission in life. But Fr. Schoch, now 78, says that he has not regretted the two sudden changes In his career which moulded his life in an unexpected way. As the founder of Loyola High School in Pune and Dnyanamata High School in Sangamner in Ahmednagar district and as an able administrator, Fr. Schoch commands respect in academic circles. But that is
Read more

A day at Mother Teresa’s Home for Destitutes 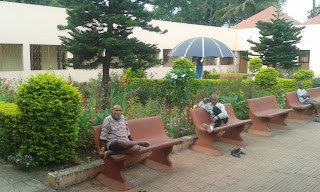 CAMIL PARKHE | Saturday, 3 September 2016 AT 09:04 PM IST          Mother Teresa , Home for Destitutes , Camil Parkhe Sakal Times Pimpri: The day begins quite early for the 80 inmates of Mother Teresa’s Home for Destitutes at Chinchwad. A nonagenarian inmate, Francis, rings the bell at 5 am and another day begins for the destitutes who are helped and cared by the nuns of the Missionaries of Charity who run the centre.    The inmates belong to various religions and a few of them join the nuns in the chapel in their morning prayers. All inmates then join for breakfast in the dining hall and those who are bedridden or unable to move, are offered the food at the bed in the dormitory. Then, each of the inmates take up different assignments voluntarily, to assist the nuns in carrying out various chores at the home. “Most of these inmates love to volunteer themselves for various jobs like bringing the loaves of bread from the nearby bakery, working
Read more

July 05, 2016
Lokmanya Tilak and Gopal Ganessh Agarkar : Clash between Political, Social reforms The issue of introducing reforms in the society has been tackled by prominent world thinkers in different ways. While it is true that the social, religious political and cultural aspects cannot be bifurcated from one another in any given society, yet at times, social reformists have found themselves in this very controversy due to the popular prevalent nature of the society. Lokmanya Tilak, the ‘father of Indian resentment against the British’ whose death anniversary falls on August 1, was deeply involved in the controversy on the issue of giving priority either to social reforms or political reforms. The so-called religious, social customs had proved to be a major obstacle to the progress of the society at that time while the country was enslaved by the ‘cultured’ British people. Therefore, the problem of giving preference either to social or political reforms had become prominent among the In
Read more